The collaboration between the laboratory of Prof. Marcelle Machluf  of the Faculty of Biotechnology and Food Engineering and Prof. Eyal Zussman of the Faculty of Mechanical Engineering, as part of the research project of Dr. Beth Shwan, a post-doctoral student from Prof. Machluf’s lab, led to the development of innovative technology for the production of heart tissue.
The development combines a production method called electrospinning, which Prof. Zussman is one of the world’s leading scientists and a unique biological material developed by Prof. Machluf for clinical use in the treatment of heart failure . The electrospinning method is based on the stretching of a liquid and its rapid solidification into a solid wire. The traction is performed by means of an electrical voltage, which draws the liquid because it is electrically charged.
Prof. Machluf  develope new methods for creating an ECM suitable for clinical applications. ECM, (Extra Cellular Matrix), is the interstellar medium in which cells reside in the organism. It is a complex network of structural proteins and control proteins that supports the cell not only structurally-mechanically but also functional aspects such as control of intracellular communication, storage of growth factors and separation of different tissues. This network plays a central role in vital biological processes, including embryonic development, wound healing, and the suppression of cancer cells.
The Technion study presents for the first time  production of ECM for the use of cardiac tissue. The new technology, based on ECM tissue derived from pig heart tissue, enables the production of optimal ECM for the implantation of implants to the heart, while fully controlling the structure of the material at the micro and macro levels. The researchers showed that the implantation of electrospinning implants does not impair the mechanical properties and biological activity of the material, allowing interaction with living cells and tissues as well as cardiac activity. In mice, it appears that despite the pig’s source of ECM implants do not trigger an immune response and will be a safe alternative to use. 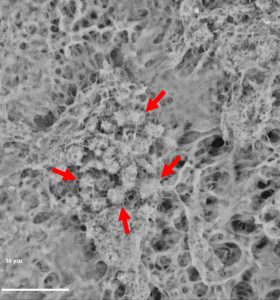 Heart cells grown on a matrix